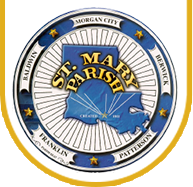 Created in 1811, St. Mary Parish was originally part of the Attakapas District and St. Martin Parish. In the midst of French culture, exploration, and settlement during the late eighteenth century, St. Mary bears the distinction of being a primarily Anglo-Protestant settlement in the midst of French-Catholic Acadiana. Their dominance in the region is evident in the non-French towns of Franklin, Baldwin, and Patterson.

These early settlers, mostly a wealthy planter class, found the soil and climate ideal for growing sugarcane, and they transformed the existing small farms producing indigo and cotton into some of Louisiana’s earliest sugar plantations. By 1840, St. Mary Parish was recognized as one of the state’s major shippers of sugar.

Today, the region’s economy is still dependent on revenues generated from sugarcane, as well as the petroleum industry, fishing, and other agricultural crops such as rice and soybeans. St. Mary’s current population of approximately 54,650 consists of Anglo-Americans, Creoles, and African-Americans, who comprise the largest segment of the populace.

The prosperity of the sugar cane industry during the antebellum period left an enduring legacy of mansions and plantation homes throughout the area, particularly in Franklin, the seat of St. Mary Parish. Franklin also has a historic district with 420 landmark structures and a turn-of-the century commercial and railroad district. Even though equestrians and buggies are no longer present, the street lamps in Franklin still bear “no hitching” signs.

St. Mary Parish is also home to the Chitimacha Indian Reservation and Museum, Cypremort State Park, the International Alligator Festival, and the Louisiana Shrimp and Petroleum Festival. The Wedell-Williams Memorial Aviation Museum in Patterson is a popular attraction as well. The museum contains replicas of aircraft parts used by Harry Williams, mayor of Patterson, and his partner, speed pilot, Jimmy Wedell. At the time of his death, Wedell held more air speed records than anyone else. Natives of the area also boast of the parish’s largest city, Morgan City, where two film classics were made—Tarzan of the Apes and Thunder Bay.

By: Alana A. Carmon | Reprinted with permission from the Center for Cultural & Eco-Tourism, University of Louisiana-Lafayette